In early December 1908, at a meeting in the Imperial Hotel, Aberdeen, it was decided to proceed with the formation of a new golf club. By March of the following year, the Murcar Links Golf Club officially came into being, but not without some controversy over the choice of name.

There was also support at the formative meeting for the names: Berryhill, Black Dog and Seaton. All of the names related to the surrounding area on which the 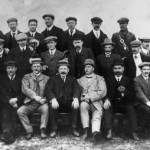 course is built. After much discussion, Murcar and Seaton were tied with 11 votes each. The Chairman cast his vote in favour of Murcar and thus there started the long history of links golfunder that name. Seaton and Black Dog gained some consolation in that they are the names of the 6th and 9th holes on Murcar respectively.

In March of 1909, Archie Simpson the Professional and Keeper of the Green at Murcar’s neighbouring course, Royal Aberdeen, gave advice on the original layout on a stretch of marvellously rugged coast running north from Aberdeen towards Peterhead, adjacent to the North Sea. His design was adopted and the course was opened for play in June 1909.

Such was the desire to play golf back then, that Murcar became the first private club in the North of Scotland to permit play on Sundays. 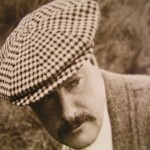 James Braid and George Smith both advised on alterations and refinements to the Murcar course in the 1930s, but it is essentially the same layout that is in play today. Braid was also responsible for the design of the Strabathie 9-hole course at Murcar. Although this course appears relatively short by modern standards at 5,369 yards (when played as an 18, as each hole has 2 separate tees for competition purposes) it is challenging nonetheless, as the Strabathie Burn comes into play on no fewer than 6 of its 9 holes.

Initially, transport to Murcar, some 5 miles north from the centre of Aberdeen, was a problem. This was until an agreement was reached with the Seaton Brick and Tile Company for the use of their tramcar on the Strabathie Light Railway. This ran through the neighbouring Royal Aberdeen Golf Club and right past the clubhouse and through the middle of the course. Payment was 6 shillings (equivalent to 30 pence today) per week to cover the extra hours of the driver on Saturdays.

When the Seaton Brick and Tile Company went into liquidation in 1924, Murcar Golf Club bought out the railway and ran it as a very successful transport venture to the club until 1949. By this time the motorcar was becoming more prevalent and public transport was improving too. In the AGM/EGM of November 2005, the Members of the time voted unanimously to return the Golf Club to its original 1909, ie Murcar Links. This coincided with its re-launching in 2006 with : a completely refurbished Clubhouse, alterations and improvements to the Murcar Links and the building of a state of the art practice facility. The rest (as they say) is history!

Any members with historical tales, memorabilia, old photos etc connected to Murcar, is asked to inform The Secretary at the Club.